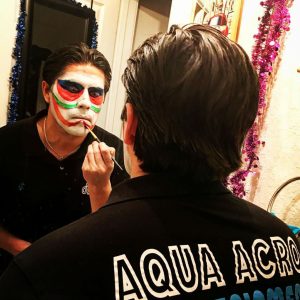 Saul began diving at a young age and became a member of the Mexican National Diving Team in 1990 and has had the honor of representing his country at multiple world championship competitions. After his career as a world class diver Saul began his career as a performer. While traveling around Europe with various show companies Saul learned the skills needed to perform capoeira, trampoline, lira, fire spitting, and the Russian swing.

After years in the business Saul became a stage manager and then eventually came the United States to perform at Azul in San Antonio Texas. Today Saul works as performer with aqua acro an also coaches gymnastics. Saul’s specialties with Aqua Acro include being our jumping stilt performer and our only male aerialist performer. 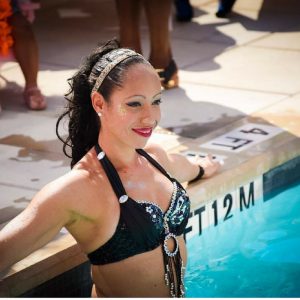 Karine comes to San Antonio after a long international career of competing and performing. Karine grew up as a synchronized swimmer and was not only Canadian National Champion but also the winner of the Athlete of the Year and a member of the World Championship Team in 1997. After her 10 year competitive years of synchronized swimming Karine became a performer in European companies. Karine is an original member of the aquatic Cirque du Soleil show “O” and has been featured as a stunt woman in films such as Colombiana.

Karine came to San Antonio to perform in the Sea World show Azul as a synchronized swimmer, aerialist, and was the synchronized swimming captain from 2011-2015. She now runs the company Aqua Acro with her husband Saul and also offers private lessons in all of her cirque skills.